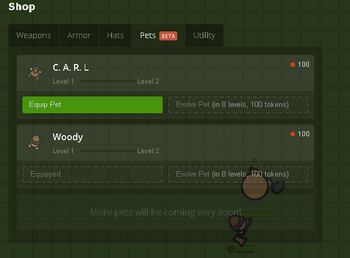 The pet menu in the Shop. Woody is currently equipped.

Pets in Zombs.io are minions that fight along with the player. Pets can be obtained through the Shop. Only one pet can be equipped at a time. Make sure you use C.A.R.L early or he will be too weak to fight waves 50-100 and will be "instakilled".

Certain actions, such as killing enemies or harvesting resources around the map, grants experience to the pet. Note that when attacking enemies, the pet does not need to deal the killing blow to gain experience. After a certain amount of experience gained, the pet levels up and its health is fully restored. The current maximum level is the current wave - if the pet kills any enemies beyond this, he will not gain any experience.

Upon reaching certain levels, you can evolve your pet. I personally recommend C. A. R. L. . will attack with sword

The pet will only attack when the player attacks first. Once a target is killed, the pet will automatically pick another one if the player keeps attacking. While moving to the target to fight, any zombie in range will be attacked by the pet. The pet will stop fighting and follow the player if outside a certain distance, and will teleport to the player at a distance of around 20 tiles. In case he is focused on an unwanted target, use the whistle (

) available in the action bar.

Your pet will inevitably take damage, especially if it is a melee attacker like C.A.R.L. The active pet can be healed in any moment with a Pet Potion (

), which can be bought in the shop. Any dead pet can be revived from the shop page; simply click the purple Revive Pet button and your pet will return within a few seconds.

Remember that enemies always aim at the closest object; if this object is the pet, then the pet will be the target.

The first added pet, obtainable by sharing the game to Facebook and Twitter. He attacks using a melee pickaxe. With the increase in damage, at higher levels, C.A.R.L will also move faster, which at the highest level players cannot outrun.

The second pet. This pet can only be obtained by subscribing to the official YouTube channel or just press the subscribe then press the x. One thing worth noticing is that when gathering several resources at the same time Woody will always go for WOOD instead of stone, which could lead you into a lack of stone.

There is no info about this pet. This pet is located in game's files, having no use. It probably has the ability to shoot white projectiles.